Veeam replication enables you to set up business continuity, avoid data loss, and failover to ready-to-go VM replicas on a secondary DR site. StoneFly enhances Veeam replication with integrated turnkey solutions and advanced data services. In this blog, we take a closer look at Veeam’s replication, failover, and failback capabilities

When you think business continuity, one of the first things that come to mind is how to successfully get your data offsite to a remote location and to protect it against a large-scale outage such as a natural disaster or a data center failure. This is where data backup and data replication come in.

One of the things that Veeam has built in its product is backup and replication. Replication does much more than simply replicating backup data to another storage target. Veeam’s replication functionality will actually take a source work load and generate a fully hydrated, fully functioning copy at a remote location standing-by ready-to-go at a moment’s notice; should you find yourself in one of these large-scale issues within the data center.

The backup copy is not something a native hypervisor would run directly and it simply lives on the repository storage.

In contrast, replication jobs are entirely different. Veeam replication looks at a source virtual machine (VM) and creates a fully hydrated and functional copy at a remote location. This copy is registered in the inventory and simply powered off when it’s not in use.

The idea behind replication is to enable a failover and a failback scenario. If you have a large site wide issue as a datacenter failure, an ISP outage or maybe an inbound natural disaster, you actually have the ability to failover proactively to avoid any such catastrophes and minimize downtime.

There are a certain number of similarities between the backup and replication process. 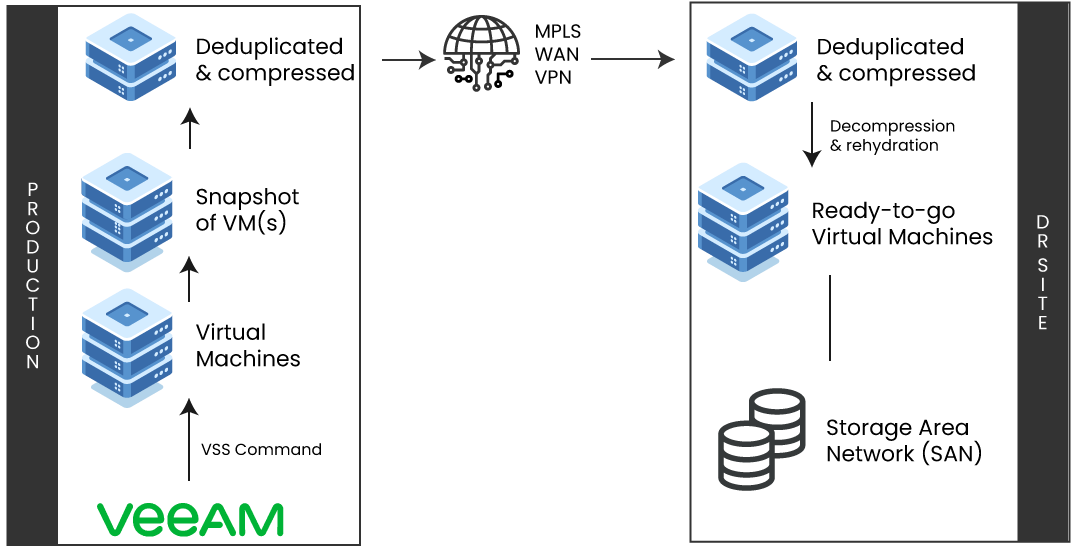 The way this process works is:

Note: Up to this point, the backup and replication process are identical.

Furthermore, as you’ll notice in the above diagram, the two environments are hosted on SAN networks. That’s because the Veeam software replicates data on a host-level as opposed to storage-level.

However, storage-level replication has some benefits over host-level replication. What Veeam’s native replication does is communicate with the host and take snapshots of VMs. While together with StoneFly, Veeam users can leverage storage level replication which essentially enables them to bypass all of the above and replicate a Logical Unit Number (LUN) instead.

Snapshot Retention on the DR Site

On the disaster recovery (DR) site, Veeam offers retention for snapshots. This retention is different from the point-in-time backup retention. Backup retention enables you to use any incremental backup and recover different versions of data.

As on the DR site, data is not being stored in Veeam format but as a native VM, the only way to retain it is with snapshots.

In a VMware environment, you can hold up to 28 snapshots, in Hyper-V you’ve got 47, at current versions. While 28 snapshots are a bit much, they provide several restore points with your replicas so that you can spin up different versions of data and failover.

Similar to backup frequency options, you can schedule hourly, daily, or even monthly replication jobs. You can also set up replication frequencies on a more granular level and get into minutes or even set it to continuous/real-time replication.

Continuous replication is not to be confused with continuous data protection (CDP). Even with the replication frequency set as continuous, the Veeam software still has to:

Once the above processes are completed, the VM is hydrated on the DR site, the snapshot is deleted, and the replication job is complete.

If you set replication frequency to continuous, all that means is that the Veeam software automatically restarts the replication process as soon as it completes a job. That could be five minutes, twenty minutes, or an hour depending on available environments variables with regards to how fast that process can conclude.

An important thing to remember is that failover to a replicated VM is an intermediate step much like the instant VM recovery feature. It’s not a click and you’re done scenario. After failover, you need to finalize it and decide as a business what do you do.

Once you have failed over, you have the ability to do a permanent failover. If you do permanently failover, the Veeam software assumes that the production environment is gone. The permanent failover feature is reserved for when the datacenter suffers a major issue and you need to run your VMs at the DR site for an extended period of time.

For example, if the production datacenter was flooded or experienced hardware failure. You know that you’re going to repair it but you’ll need to run your VMs on the DR site in the meantime. That’s when you do a permanent failover, restore business operations, and run your workloads at the DR site.

Failback assumes that you’ve failed over to the DR site. Once your production is ready, all the changes that have been tracked at the DR site, the Veeam software resyncs them to the production site for failback.

The original VMs are still at the production site but they’re outdated because all the changes are tracked over at the DR site, the failback will sync those changes and update the source site VMs with only the delta changes.

If the original VMs are corrupted or no longer present on the production side, the failback will restore the entire VM as it exists at the DR site.

An alternate option would be to physically transfer the backups of VMs from the DR site to production instead of transferring them over the WAN, MPLS, or VPN connection. Then, we use these backups as a seed and sync the delta changes to rebuild the VMs.

After a successful failback, let’s say you’re now running production, everything is smooth, all the services are running properly, the final step is then to commit the failback.

Furthermore, StoneFly appliances, cloud products, and services not only support Veeam capabilities but also enhance them with an array of advanced data services that deliver data security, optimization, and real-time monitoring.

Business continuity requires you to transfer your data offsite and protect it from large-scale threats such as cyber-attacks, ransomware, natural disasters, and hardware failure.

Looking to set up replication, failover and failback for your business-critical VMs?

Contact us today to discuss your requirements and projects with our Veeam engineers:

Connect with Us on Our Social Media