31
MARCH, 2017
Cloud is a kind of an Internet-based-Service offered on demand to a User who does not need to bother with implementation details or maintenance.
Cloud service models are essentially a set of IT-related services offered by a cloud Provider to provide IT resource to a consumer. Many cloud Service-Providers offer a wide spectrum of cloud services such as Storage, Content Management, CRM, Social Computing and Collaboration and much more.

The first core cloud service model provided by StoneFly is Infrastructure as a Service or “IaaS”. In this model, the cloud customer outsources the infrastructure responsibility to StoneFly. The red box is what is going to be managed by you. The rest of the items outlined in green is what you have decided to outsource to StoneFly to maintain.

StoneFly would not only own the equipment, which is providing the infrastructure resources but will also be responsible for the management, the operations and maintenance of these resources. Everything in green is what you are outsourcing, which are all these typical infrastructure components like the servers, storage, virtualization and networking components.

The dotted line around the Operating System (O/S) represents the fact that you may or may not need to bring your own operating system. This will depend and vary based on the licensing agreements and the chosen Operating System type that you have decided to deploy, as well as how you plan to deploy this Operating System.

This includes options of a shared environment, a multi-tenant environment or if you decide to deploy in a dedicated environment where you are renting an entire physical server or data center.

If you think about cash flow, when you implement a StoneFly Infrastructure-as-a-Service model you are no longer incurring capital expenses or CapEx from buying new hardware or additional operating expenses related to hardware maintenance or upgrading server.

The StoneFly Infrastructure as a Service allows you to easily create a new infrastructure quickly and efficiently without having to purchase any new physical hardware. This helps Organizations save on resources, time and money.

Common Scenarios of Deploying The StoneFly Infrastructure as a Service Model

Another common scenario would be an organization looking to meet hardware capacity spikes, which can be addressed by extending these workloads into StoneFly’s cloud infrastructure without having to add any physical resources to their current data center.

StoneFly “IaaS” products include: The StoneFly (USS™) Hyper-Converged Appliance All in One Infrastructure Solution.

The Platform as a Service or “PaaS” enables customers who are mainly developers build their applications without assuming the capital and resource costs that they would be obligated to pay if they had to purchase and maintain their own infrastructure. These include runtime, middleware, O/S, Virtualization, Servers, Storage and Networking costs.  Rather these customers just purchase the StoneFly platform to create their applications or services.

In addition to the platform infrastructure, these customers also gain access to all the necessary tools, programming languages and APIs provided by StoneFly that are needed to create their application in the cloud.

Developers using “PaaS” don’t need to worry about configuring or maintaining an infrastructure for development. They are able to focus on what matters to them – just the application development, enabling them to bring their new applications or changes to market much faster than in a traditional environment. You don’t have to worry about all that underlying infrastructure as well.

This service provides customers with a software application on demand over the internet usually using a web browser. Like the other cloud service models, “SaaS” is hosted at StoneFly. As a customer you do not need to purchase the hardware required to deploy and operate this application.

With StoneFly’s Software-as-a-Service model, customers do not have to support the installation or the infrastructure that supports the application. 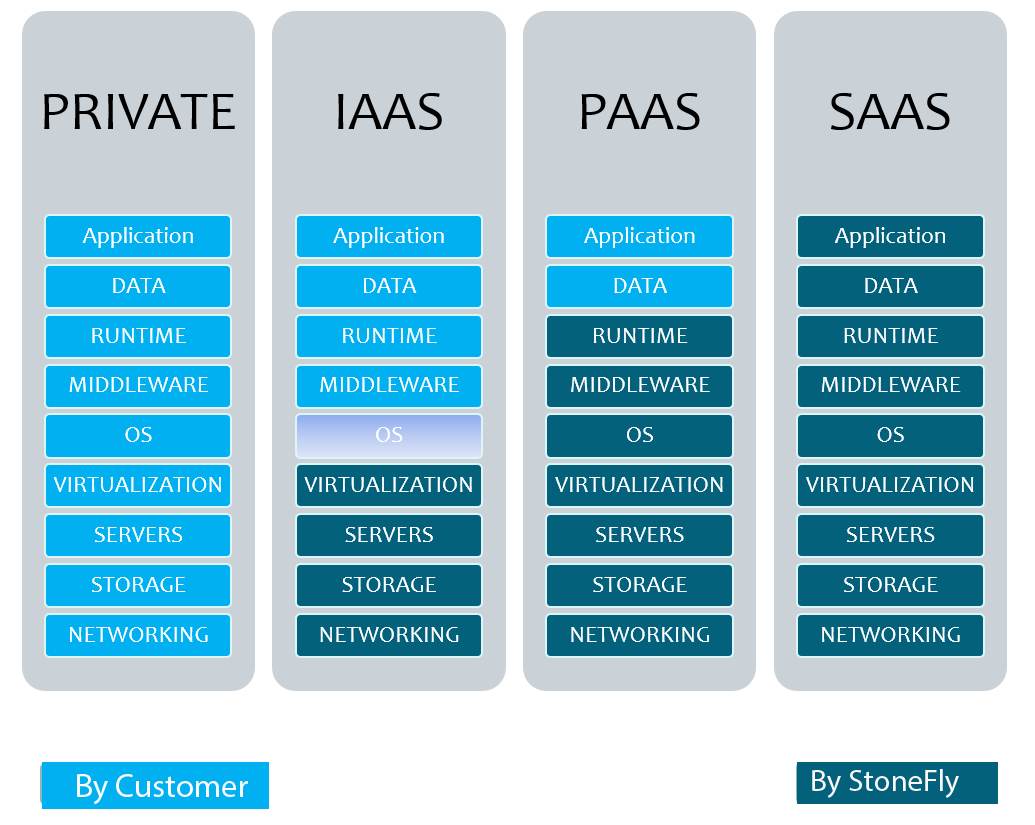 It is very important to understand the differences between the infrastructure platform and software-as-a-service model as these are the core models that all the others are based on.

The StoneFly “SaaS” products include: