Media Center MC365 is Platform based on many advance technologies.

It consists of Scale-out Hybrid (physical, virtual, Cloud) as an intelligent Media or Storage node.

Cloud Connect to Microsoft Azure and AWS extend its capabilities as a hybrid solution.

Each Media Center node can provide a few TeraBytes to  PetaBytes of different tier of storage.

Every node can accommodate any combination of Enterprise SAS, SSD flash, cloud storage,

Media Center appliances are available in 3 different configurations: integrated, high-availability modular(HA), or scale out. An embedded hypervisor allows your workflows compontes such as  MAM, Archive, transcoder and News run as virtual machines directly on the Media Center at no extra cost. 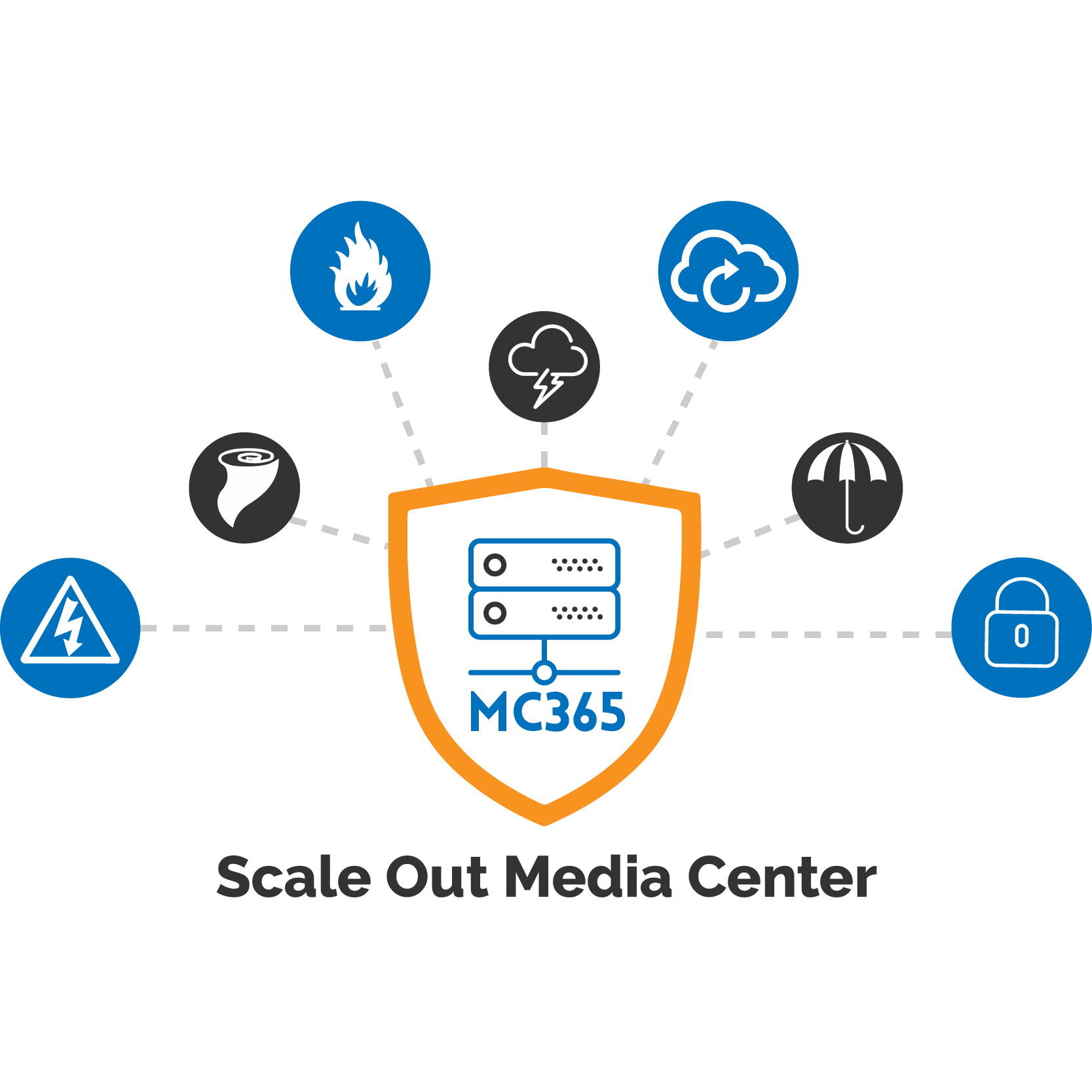 Simple and Cost-Effective – Lowest cost of CapEx and OPex

Based on standard hardware components and cost-effective 1/10/40/100G Ethernet technology, Media Central has lower Capex and OPex.. Buy what you need and scale as your workflows grows.  NO forklift upgrade.

Media Center systems have no single point of failure, and leverage features such as Clustering, dual active-active nodes with transparent failover, redundant data paths to protect against componet and  node failures. No down time is required even for activities such as software and firmware upgrades or adding storage nodes.

What can we manage:

The Scale Out Media Center feature allows you to “Scale Out” as your business grows by adding nodes.

Manage nodes with just a single user interface. Each time a node is Scaled Out, it adds more capacity, more throughput, and more concurrency. Installation, management, and scaling is simple to achieve at any size.

MC365 can Scale to theoretical unlimited petabytes all while handling thousands of clients and workflows. It functions as a distributed resource overlay, polling together Storage, CPU, memory, network resources as building blocks over TCP/IP, aggregating resources and managed as a single global Always On-Air® system. 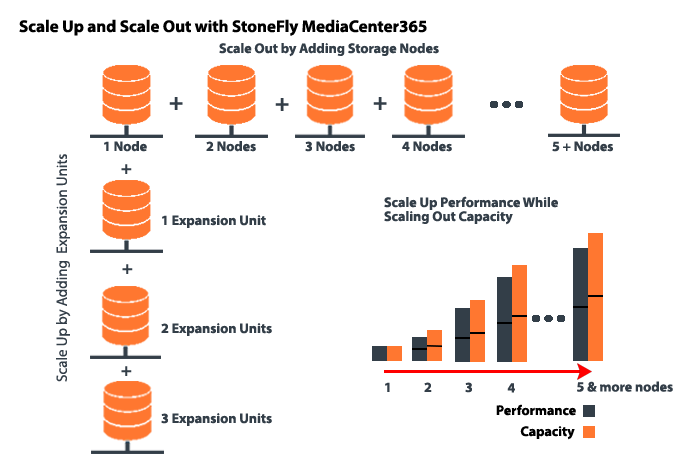 NO Metadata – NO MetaData Director, NO Centralize Database, any request can be handled by any node at any time by hashing the Read/Write request to calculate the file location across all the nodes. By automatically calculating the answer, Integrated Scale Out NAS avoid bottleneck and Metadata corruption and can handle a wide range of files size without affecting the performance and allowing for unlimited scalability.

In addition to No Metadata Model, Other performance Techniques employees are: Read ahead, Write behind, Async IO, Intelligent I/O, Aggregated Operations,

Distributed File System – A file system in which data is spread over different nodes where users can access the file without knowing the actual location of the file. User doesn’t experience the feel of remote access.

Stackable design allows for agile development and deployment for a new feature for customers to enjoy.

Each Server client can access their files from any node. One a single IP for all the nodes. Exclusive access can be given to one or multiple clients to be serviced by one IP node.

NO or little Inter-Node traffic.  NO need to high-speed interconnects and  Network to purchase and maintain.

Performance Able to deliver when properly configured Can exceed aggregate read and write speed in most use cases with files sizes at full network bandwidth of up to  3GB/Sec per Node and aggregate as more node added.

Support of Hardware Raid and Erasure coding within or across Nodes for unlimited High availability and redundancy.  Selectable redundancy failover from 1 to 5 disk per node.

Segments are partitions that files are placed for sharing between trusted storage pools.

volume is a logical collection of segments. Most of the management operations are performed on the volume such expansion. Volume can expand across nodes to create a single namespace.

Auto Re-balance allows a distributed volume with only one segment. For instance, we create 10 files on the volume through volume. Now all the files are residing on the same segment since there is only segment in the volume. On adding one more segment to the volume, we may have to re-balance the total number of files among the two segment. If a volume is expanded or shrunk.

Erasure coding (EC) is a method of data protection in which data is broken into fragments, expanded and encoded with redundant data pieces and stored across a set of different locations

Distributed Volumes This type of volume spreads files across the segments in the volume across the nodes.

Distributed Dispersed volume there will be multiple sets of segments (sub-volumes) that stores data with erasure coding. All the files are distributed over these sets of erasure coded segments. In this scenario, even if a redundant number of segments is lost from every dispersed subvolume, there is no data loss.

On a tiered volume, files are tracked according to the frequency of access. More accessed files tend to migrate to faster storage and less frequently used to slower storage. The behavior can be influenced with tuning parameters.

Self-heal If any of the segments in a replicated volume are down and users modify the files within the other segments, the automatic self-heal daemon will come into action as soon as the segment is up next time and the transactions occurred during the down time are synced accordingly.

POSIX – Portable Operating System Interface (POSIX) is the family of standards defined by the IEEE as a solution to the compatibility between Unix-variants in the form of an Application Programmable Interface (API).e data needs to be re-balanced among the various segment included in the volume.

Geo-replication – It provides back-ups of data for disaster recovery. Here comes the concept of master and slave volumes. So that if the master is down the whole of the data can be accessed via slave. This feature is used to sync data between geographically separated servers. Geo-replication can be done from or to On-perm to Public (Microsoft Azure, Amazon (AWS) Private Cloud and  Cloud to cloud private or public.

Cloud Cache: Build in Flash Cache feature allows some volumes be used as a front-end cache for Public cloud storage such Microsoft Azure Blobs or S3 and Glacier from Amazon.

Snapshot Provides flexibility in data backup – The Snapshot is block bases which create a point in time backup delta from the only blocks that have changed from the last snapshot. Snapshot is read-only files that help in recovery and protection against ransomware.

Encryption   Network encryption using TLS/SSL for authentication and authorization,
I/O encryption – encryption of the I/O connections between Clients and NA

Management encryption – encryption of the management connections within volumes. The node and volumes can be fully dispersed between On-Per and Clouds. Support for ASE-256 at rest and transit. 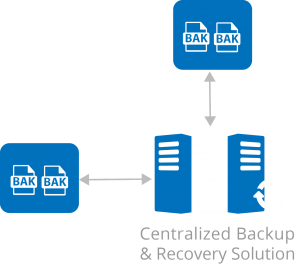 The many backup features of the MC365 include:

All MC365 appliances can be scaled up to 256 drives per node to achieve up to 1.5 PetaBytes of raw storage capacity for your storage and backups.

However, StoneFly’s optional Super Scale Out Storage upgrade allows the MC365 to be scaled out to a nearly unlimited storage capacity while increasing performance across multiple nodes for aggregation of throughput. The Backup Controller can be run on a single node or across all of the MC365 nodes.

Adding Super Scale Out Storage to the MC365 enables it to deliver unprecedented performance, redundancy and scalability. MC365 appliances with StoneFly’s Super Scale Out were designed for customers requiring a powerful storage solution that can scale out storage capacity while scaling up performance. Perfect for managing large quantities of backups and unstructured (file-based) data within a single global namespace and a single file system. StoneFly’s Super Scale Out was designed for markets that require vast quantities of high bandwidth throughput or fast parallel throughput for very large files required by high performance computing in media and entertainment.

MC365 appliances with StoneFly’s Super Scale Out feature allows you to “scale out” as your business grows by adding nodes without losing performance. You can expand one or more volumes across multiple nodes using no metadata and a single namespace. Usable bandwidth increases as new nodes are added. Best of all, you can manage multiple nodes with just a single user interface. Each time MC365 nodes are scaled out, it adds more capacity, more throughput, and more concurrency. Installation, management and scaling is simple to achieve at any size.

Additional MC365 nodes can be added on the fly while adding CPU horsepower and storage capacity. This linear scalability provides predictable performance and allows users to pay as you grow and to only buy what you need.

What is Super Scale Out Storage?

Super Scale Out Storage is a distributed file system that can scale to several petabytes all while handling thousands of clients. It functions as a distributed data overlay, polling together storage building blocks over TCP/IP, aggregating disk resources and managing data in a single global namespace. The unified platform handles blocks, files, objects and big data.

For additional performance and twice the redundancy, MC365 with Super Scale Out can also be configured as mirrored twin appliance nodes using a single name space volume. The Backup Controller can be run on a single set of twin nodes or across all of the MC365 twin nodes.