14
SEPTEMBER, 2018
This month we will be discussing best practices for enterprise IT environments to leverage Veeam Backup and Replication software for enterprise data protection, high availability and data recoverability. This is the first article of the series dedicated to the best practices related to backup proxies.

Before we discuss the best practices, let’s briefly define backup proxies and the services and components that make up Veeam backup proxies.

What is a Backup Proxy?

The basic operations of a backup proxy include:

The following are the services and components that make up Veeam backup proxy:

Users can easily utilize backup proxies to scale Veeam backup infrastructure based on the organization’s requirements. In terms of deployment, IT environments have two options:

For smaller IT environments, the backup proxy is automatically installed on the Veeam-ready backup server as part of the Veeam backup and replication installation and is sufficient.

In an advanced deployment, the backup proxy is manually assigned to one or more Windows servers. This facilitates offloading the Veeam backup server, achieving high performance and reducing the backup window. That is why for large installations, it is recommended to deploy dedicated backup proxies 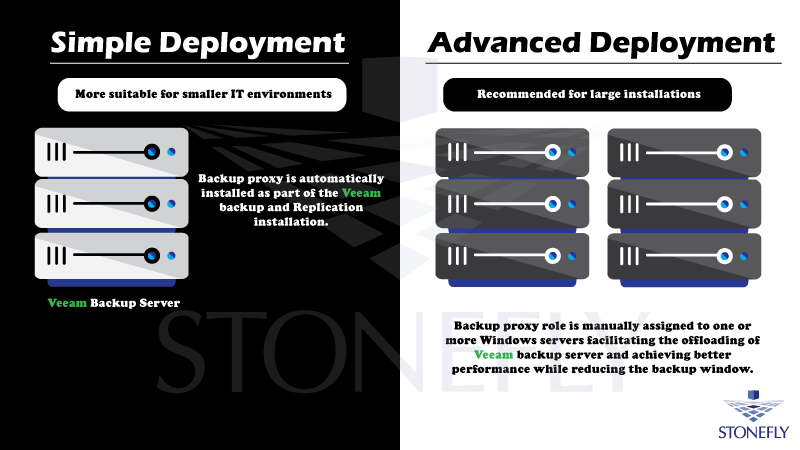 Backup proxies are deployable in the primary site, where backup servers are located, or in a remote site where additional infrastructure needs backup. Backup proxies can be installed on any managed Microsoft Windows server added to the backup infrastructure. The transport modes for the backup proxy depend on whether the proxy server is installed on a physical or virtual machine.

As mentioned earlier, the backup proxy handles data traffic between vSphere or Hyper-V infrastructure and backup and replication during backup, replication, VM migration jobs, VM copy or VM restore. Backup proxies are also used to detect and scan snapshots to enable Veeam Explorer for Storage snapshots features when any primary storage is added to the backup server.

In other words, a backup proxy facilitates a light-weight transport service that takes a few seconds to deploy. When users add a Windows-based server to Veeam backup management console assigning the backup proxy role to it, Veeam backup and replication installs the necessary components and starts the required services on that server. Any host in a Hyper-V cluster is automatically enabled as proxy server, when it’s added to the infrastructure. With built-in Intelligent Load Blancer (ILB), each time a job starts the backup server manages dispatch of tasks to proxy servers.

At installation, the proxy server is configured for two simultaneous tasks by default while the subsequently added proxy servers analyze the CPU configuration. Automatically, the proxy server proposes to configure 1 task per CPU core. During deployment, users choose the data stores the proxy can access. This information is stored in the configuration database. At backup time, this information is used to automatically select the best transport mode depending on the type of connection between the backup proxy and data store.

First, Veeam backup and replication checks if data processing can be assigned to a backup proxy with the following proxy:

Note: At the backup repository, only one thread writes to the backup storage per running job. If few jobs with a higher number of VMs are processed simultaneously, users may experience that these threads cannot fully utilize the available backup storage performance. Users can also consider enabling per VM backup files in the event the throughput per I/O stream creates a bottleneck.

Note: Default recommended value is one task per core/vCPU, with at least 2 CPUs. To optimize the backup window, users can cautiously oversubscribe the Max concurrent tasks count but they need to monitor CPU and RAM usage carefully.

Stock VDDK (Virtual Disk Development Kit) transport modes have a number of limitations, such as the inability to process multiple disks in parallel when using Virtual appliance transport mode (hot-add) thereby introducing excessive VMFS metadata updates, when performing replication, or being unable to backup from NFS based datastores. Veeam developed a logic to bypass VDDK and overcome these limitations when it is more optimal to do so.

In order to achieve the best backup window, it is recommended to oversubscribe the tasks slots, and start more jobs at the same time. This enables Veeam to leverage the maximum of the task slots and lead the process into an optimum backup window.

That concludes our recommendations for the best practices pertaining to backup proxies. Subscribe to our newsletter and keep an eye out for the upcoming best practices article about Veeam backup and replication in the series.