This is the last article in the “Data Center Hardware Overview” series. In this article we’ll take a closer look at the architecture, key components, and scalability of our unique and innovative Totally Disaggregated (TD) High Availability (HA) cluster appliances built for the most demanding enterprise workloads.

Previously in the series, we discussed:

If you’re looking for a detailed overview of StoneFly data storage and backup & DR appliance hardware, we highly recommend reading the previously published articles as listed above.

To simplify your reading experience, here’s the table of contents for the article: 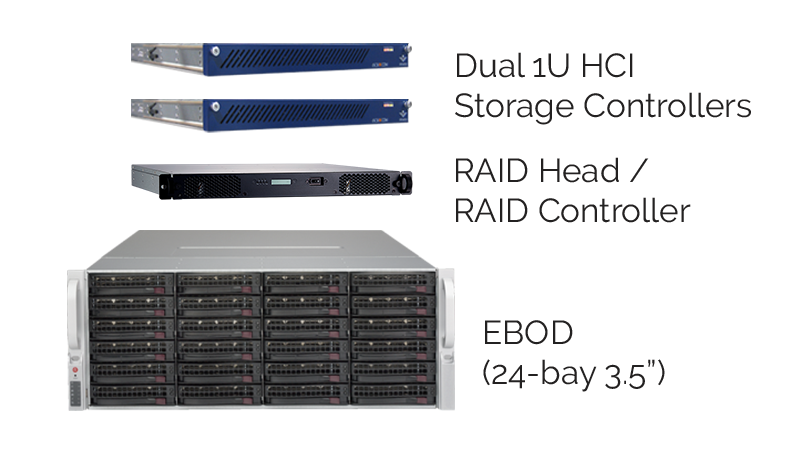 The two storage controllers or Hyperconverged Infrastructure (HCI) controllers (with storage hypervisor) provide multi-path access to storage resources with aggregated 2x processing capabilities. With the RAID controller in a separate chassis, the process of repair is easier and convenient for data center administrators.

With key components, distributed in disaggregated hardware chassis, there’s no need for forklift upgrades. The process of scalability instead becomes simpler enabling users to scale performance and storage capacity individually. This makes the totally disaggregated appliance a great fit for enterprise workloads processing large data volumes (or big data) on a daily basis.

Now that we have a general idea of the hardware chassis that make-up StoneFly totally disaggregated appliances, let’s take a closer look at some of the key hardware components of the enterprise data center hardware.

This hardware components acts as the management layer for the data storage or backup & DR system. The storage OS, storage hypervisor (if hyperconverged) and backup software (for backup appliances) are installed on this hardware chassis.

In the StoneFly totally disaggregated appliance configuration, the RAID controller comes in a separate 1U hardware chassis. The 1U chassis has dual active/active RAID controllers. In the event of a single RAID controller failure, the system automatically fails over to the second redundant RAID controller and continues operations without disruption.

The hardware independent chassis facilitates users to independently replace RAID controllers in the event of hardware failure instead of forklift upgrades.

StoneFly totally disaggregated appliances can store from a few hundred terabytes to petabytes of enterprise data with EBODs. 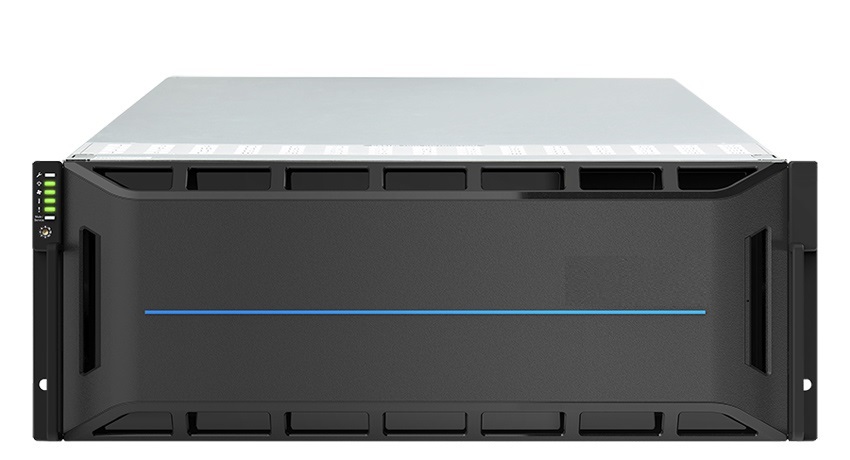 StoneFly EBODs enables users to hot-swap storage drives dynamically and effortlessly. The process of adding new drives or replacing existing ones is nearly tool-less. Data center administrators don’t have to shut down the system just to add more storage capacities or replace failed drives; this saves time and is a lot more convenient than the traditional routine processes.

The hot-swappable hardware facilitates data center administrators to effortlessly replace power supplies dynamically without having to turn off the system.

StoneFly storage controllers or HCI controllers can support processor upgrades to dual 28-core Xeon processors and system memory upgrades to 4TB per node; depending on appliance series and model.

IOPS (read & write commands) are aggregated over the total number of storage controller or HCI controller nodes in the totally disaggregated system. 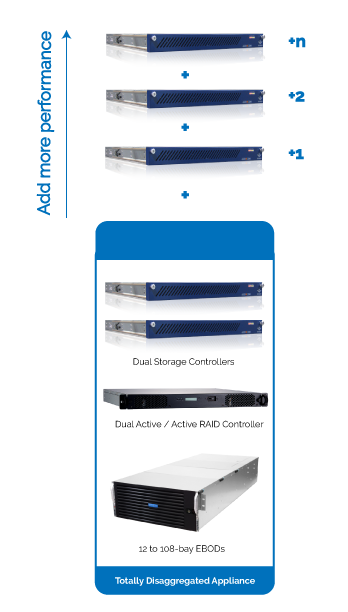 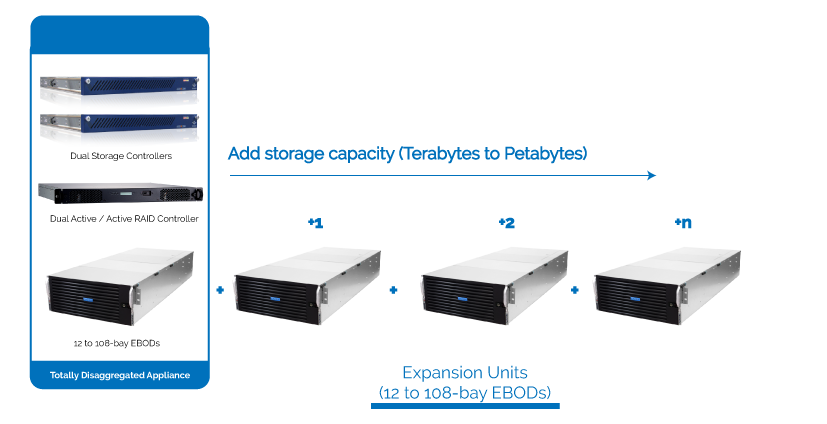 Our totally disaggregated appliances enables users to add storage capacities dynamically without having to go through the strenuous process of forklift upgrades. As mentioned earlier, the 1U and 2U storage controllers are capable of supporting thousands of storage drives with expansion units.

To add more storage drives, and in turn more storage capacities, users can add more EBODs to their totally disaggregated appliances. The integration process is as simple as “plug and play”. The smart StoneFly storage operating system (StoneFusion or SCVM for storage hypervisors) makes the process of integration seamless and quick.

There are two ways to scale out StoneFly totally disaggregated appliances: 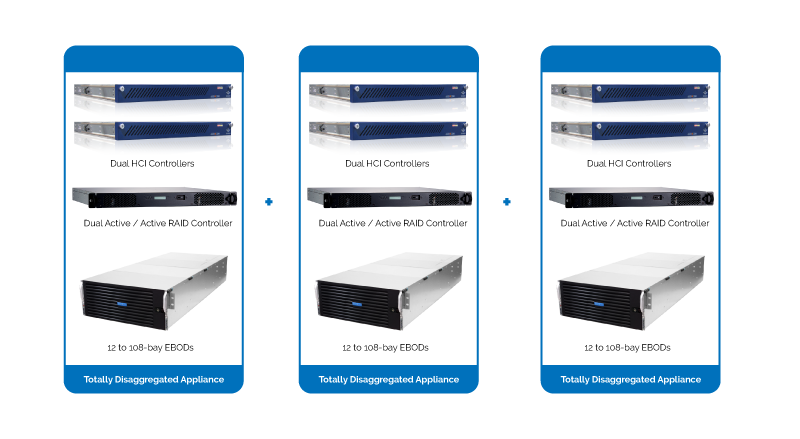 Following is a list of StoneFly solutions with support for the totally disaggregated appliance hardware architecture:

The totally disaggregated appliance hardware is a flexible, highly scalable and high performance enterprise data center architecture suitable for a wide variety of enterprise use-cases. The hardware is best fit for enterprises looking for reliable and easy-to-manage solutions with hundreds of terabytes to even petabytes of storage capacities with proportional performance capabilities.