27
SEPTEMBER, 2017
Data backup requirements are on the rise; the requirements are forever evolving and demanding. It isn’t simply about data backup and sharing anymore. Specifically when it comes to virtualization, the main concern of any user, regardless of the scale, is the protection of their sensitive data.

There are tons of companies providing cloud backup services, so what makes StoneFly’s service provision unique? What differentiates StoneFly from them and why is StoneFly trusted by clients that include governments? Let’s look at what practices StoneFly employs to efficiently backup, recover, secure and protect your data.

This is an integral part of the backup architecture that Microsoft designed and is set in place with Hyper-V. It’s not something new; it has been around since 2003; so this is not a new concept. The initial beginning of the Volume Shadow copy Service (VSS), made it possible to go back and recover a file from its previous editions in case a file was deleted. Microsoft paired VSS with other components to evolve it in accordance to cloud backup solutions. 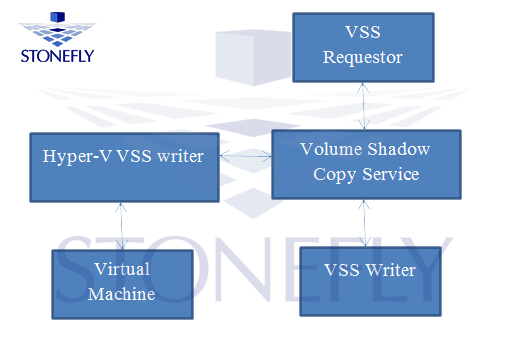 The first component that comes in the line of the components associated with VSS is the VSS requestor. VSS requestor makes a request to the volume shadow copy service to make a backup. The term backup here implies the creation of an image and its storage as a VHD file. This creation of the image is done by one of the VSS writers. In case of a backup and replication job, the VSS requestor asks the volume shadow copy service that “I need to backup a virtual machine (VM)”.

Compared to the traditional agent based backup from a physical environment, this process is worlds apart. It’s less costly, more time efficient, secure and reliable than physical servers. It may act like a physical machine but it has the benefits of a VM.

Compared to the traditional agent based backup from a physical environment, this process is worlds apart. It’s less costly, more time efficient and it’s more secure and reliable than physical servers. It may act like a physical machine but it has the benefits of a VM.

Changed block tracking (CBT) is a driver that comes along when you install Veeam backup and replication. It’s infused or injected into the Hyper-V host. What it does is that it monitors changes that are made to the VMs that have been backed up. The CBT runs on each virtual host, not on the VMs themselves, but rather on the Hyper-V system. The CBT runs automatically, while running it monitors any changes made to structures in a virtual environment that have been backed up.

Let’s consider an example to better understand this driver and what makes it one of the best practices to ensure secure backup. Let’s say you have done your initial backup on Monday. Any changes that are made are going to be noted by the CBT mechanism. Now, when it comes to take the next backup, instead of going back and pursuing the entire structure of the VM, you are able to look at the file created by the CBT. It will show you the files that have changed and make the incremental backup from here on. This dramatically reduces the time to take a backup.

These practices ensure that you have multiple ways of creating backups for your hyper-v environments. VSS can account for all the changes that happen after the backup and you can have the data readily available and the recovery is time efficient. If you’re interested in looking for cloud backup solutions that can provide such services, check out StoneFly. It has everything you need and more.